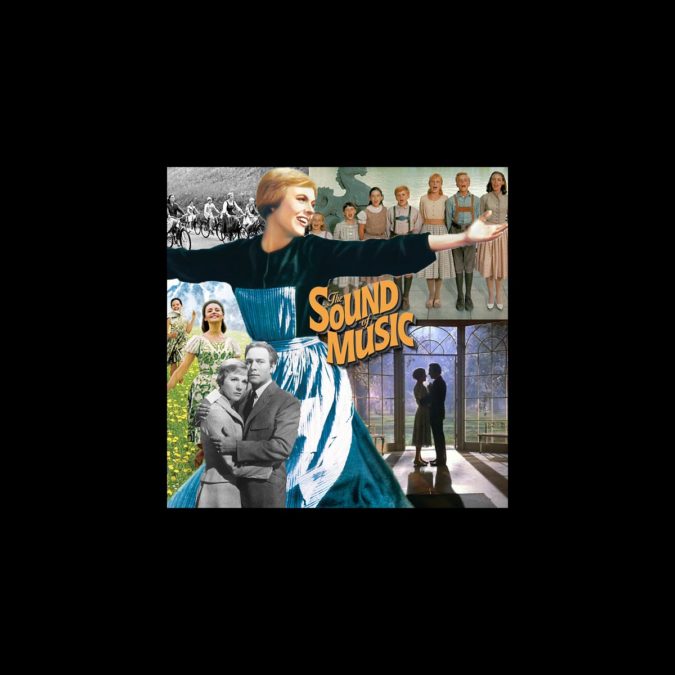 Can you believe that the hills have been alive with The Sound of Music for 50 years? It's been five decades since the beloved film version of the musical, starring Julie Andrews as an Austrian novice nun-turned-nanny was released in America on March 2, 1965. To celebrate, we've rounded up 50 fun Sound of Music facts about the last musical written by legendary theatrical pair Richard Rodgers and Oscar Hammerstein II. So put those arms out and twirl your way through this trip down The Sound of Music memory lane, with help from The Sound of Music FAQ by Barry Monush, Maria Von Trapp: Beyond the Sound of Music by Candice F. Ransom, The Making of The Sound of Music by Max Wilk and more.

1. It's no secret that The Sound of Music was based on a true story, but there were plenty of differences between Maria Kutschera's 1949 memoir The Story of the Trapp Family Singers and the film. For one thing, Maria was brought to the von Trapp home to care for one child who had scarlet fever and was too ill to walk to school, not all seven children.

2. The von Trapps did escape Austria as the Nazis came to power, but they didn't flee over the Alps, they got on a train to Italy and then traveled to America, where they had a concert tour scheduled. The day after they left, Hitler ordered the Austrian borders shut.

3. When they left Austria, Baron von Trapp and Maria had already been married for years and had two children of their own, with another on the way.

4. The real Maria was kind of a Mama Rose! She kept the Trapp Family singers together with an iron will.

5. When the von Trapps came to America they settled in Stowe, Vermont. They opened the Trapp Family Lodge, which is operational to this day.

6. Maria sold the rights to her memoir to German producers who made two films. The Trapp Family and its sequel, The Trapp Family in America, were incredibly popular in post-War West Germany.

7. Broadway producer Richard Halliday thought the role of Maria would be great for his wife, Mary Martin, but he originally conceived of it as a play with Austrian folk songs rather than a full musical, written by playwrights Howard Lindsay and Russel Crouse.

8. Halliday approached musical super-duo Rodgers and Hammerstein about writing one song for the show; they countered with making it a proper musical.

9. Because she'd sold the rights to the German producers, Maria and the von Trapps didn't see any money from The Sound of Music's success.

11. The Sound of Music was the eighth and final musical written by Rodgers and Hammerstein, but Hammerstein never saw the movie. He died of stomach cancer nine months after the Broadway premiere.

12. "Edelweiss" was the last song Oscar Hammerstein ever wrote, at the last minute during the show's tryout in Boston.

13. Hammerstein wrote "Edelweiss" for the character of the Captain because he thought original star Theodore Bikel's talent as a folk musician was being underutilized. The same year Sound of Music opened on Broadway, Bikel co-founded the Newport Folk Festival with Pete Seeger, Oscar Brand and George Wein.

14. Audience members were totally convinced that "Edelweiss" was an actual Austrian folk song.

15. The Sound of Music opened on Broadway at the Lunt-Fontanne Theatre on November 16, 1959. Both major New York critics hated it, finding it way too saccharine, but producers already had $2 million in advance ticket sales so it didn’t really matter.

16. During her two years in the Broadway show, Mary Martin only missed one show.

17. Due to the design of the two-story set, Martin had to run three miles during every show to make her entrances and exits.

18. The play won six Tony Awards, including Best Musical and a third Best Actress for Martin (she already had trophies for South Pacific and Peter Pan).

19. Even though two of the von Trapp children were boys, the entire children's cast was nominated in the Best Featured Actress category as a single nominee. They lost out to Mother Abbess, Patricia Neway.

20. The original cast recording of The Sound of Music was nearly as popular as the show itself. Recorded just a week after the show's Broadway premiere and released by Columbia Records, the album was number one on the Billboard charts for 16 weeks.

21. When it came to the movie, Julie Andrews wasn't the first choice for Maria! Producers wanted Grace Kelly or Doris Day to replace her. Mary Poppins (for which Andrews would win an Oscar) hadn't hit screens yet and they didn't know if she had the star power to carry the feature film. (Day ruled herself out as "too American.")

22. Sean Connery, Richard Burton and Bing Crosby were in the running to play Captain von Trapp, before the role went to relative newcomer Christopher Plummer.

23. Patti Duke, Mia Farrow, Sharon Tate and Geraldine Chaplin all auditioned for the role of Leisl, which eventually went to Charmian Carr.

25. Kym Karath, who played little Gretl, was already a film vet when she auditioned for The Sound of Music. She was feeling so adult that for her audition she sang "Sixteen Going on Seventeen." She was five.

26. After Oscar Hammerstein's death, Richard Rodgers wrote two new songs for the film ("I Have Confidence" and "Something Good") by himself.

27. Christopher Plummer never cared for the movie. He thought it would compromise his reputation as a serious Shakespearean actor.

28. Plummer admitted he developed a crush on co-star Andrews when he saw her in My Fair Lady on Broadway, but called working with her like "being hit over the head with a big Valentine's Day card, every day."

29. William Wyler, the film’s original director, quit to work on another movie and that's probably a good thing. Wyler was apparently a little deaf and planned to make the piece a somber film that focused more on the war.

30. While filming the iconic opening scene, twirling in the hills of Austria, Andrews kept getting knocked down in the mud by the gusts from the helicopter carrying the camera.

31. Charmian Carr slipped and fell through a window in the gazebo while filming "Sixteen Going on Seventeen." Her bandaged ankle had to be airbrushed out in later versions of the film.

32. When the boat carrying the von Trapp brood tipped over, Kym Karath, who played Gretl, nearly drowned because she couldn't swim. She swallowed a lot of water, which she then threw up all over co-star Heather Menzies, who played Louisa.

33. "Edelweiss" was so good that film director Robert Wise also thought it was a real Austrian folk song. When they were shooting the scene at the Salzburg music festival, filming was delayed for hours while hundreds of Austrian extras were taught the words.

34. Also during that scene, Plummer was drunk.

35. If you look closely at the film, you'll spot the real Maria von Trapp in a cameo, walking past a stone archway while Julie Andrews sings "I Have Confidence."

36. In one of Maria von Trapp’s memoirs, she wrote that she wasn’t invited to the premiere of the film, and producers couldn't find her a seat when she asked.

37. One of Maria's biggest beefs with the film was with the geography. Not only does Salzburg not border on Switzerland, but taking that route out of Austria would have sent them straight towards Berchtesgaden, Hitler's summer retreat.

38. She also thought both Martin and Andrews made her seem to sweet, calling them "too gentle-like girls out of Bryn Mawr."

40. The Sound of Music won five Oscars in 1965, including Best Picture. It's one of only four films ever to win a Tony Award for Best Play or Musical, and later win Best Picture.

41. Adjusted for inflation, it's one of the highest grossing films ever made, right behind Gone With the Wind and Star Wars.

42. It had the longest first run in U.S. cinemas ever at four and a half years.

43. Charmian Carr, who played Liesl, went on to become an interior designer for celebrities, including Ernest Lehman and Michael Jackson.

44. Heather Menzies, who played Louisa, worked in TV for years and went on to pose for Playboy.

46. There's only been one Broadway revival of The Sound of Music, in 1998 starring Rebecca Luker as Maria. A young Laura Benanti made her Broadway debut as a postulant and Luker's understudy.

47. Andrew Lloyd Webber almost got Scarlett Johansson to star in a 2006 London revival. When the plan fell through, Webber cast the role of Maria via his reality show How Do You Solve a Problem Like Maria?

48. ScarJo is in good celeb company when it comes to loving The Sound of Music—Elton John once held a private sing-along for his birthday.

49. The 2013 live TV version, starring Carrie Underwood as Maria, helped reinvigorate a new era of musicals on screen. It didn't hurt that the cast also had legit Broadway cred, including Laura Benanti as Elsa Schrader, Audra McDonald as Mother Abbess and Christian Borle as Max Detweiler.

50. Even before Lady Gaga's killer Sound of Music tribute at the Oscars, Andrews says she was a fan of the pop star. Now they've bonded and become new friends.