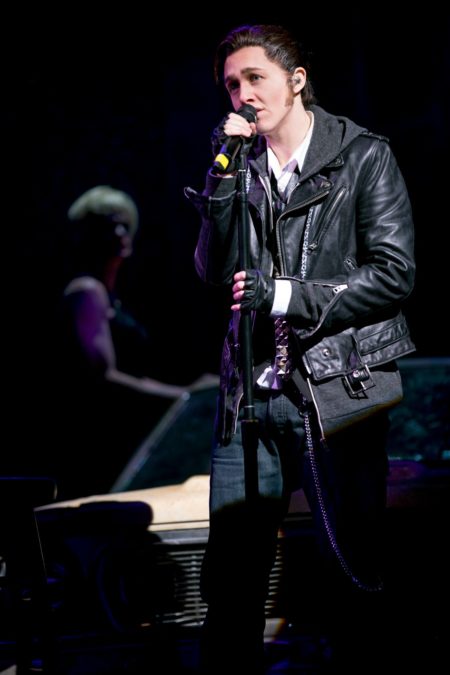 Tony winner Lena Hall will reprise her performance as Yitzhak in the national tour of John Cameron Mitchell and Stephen Trask's Hedwig and the Angry Inch, joining the previously announced Darren Criss, who'll play the titular trangender rocker. But wait! Hall will also play the role of Hedwig for one performance a week in San Francisco and Los Angeles. The touring production of Hedwig will kick off at San Francisco's SHN Golden Gate Theatre on October 2, where it'll run through October 30. The show will then move to the Hollywood Pantages Theatre in L.A. from November 1 through November 27. Following San Francisco and Los Angeles with Criss and Hall, the tour will subsequently continue across North America. Additional casting will be announced at a later date.

"I’m thrilled to be returning to Hedwig and the Angry Inch performing not one, but two iconic roles in Los Angeles and my hometown of San Francisco. I have never been one to shy away from a challenge and playing Hedwig has always been a dream of mine," said Hall, in a statement. "To be able to play both Yitzhak and Hedwig in the same day presents one of the biggest challenges I have seen to date and I’m so excited! Not only will I get to share the stage with my fellow San Francisco native and friend Darren Criss; but I will also get a chance to begin my own journey as the glam rock heroine Hedwig. To tell her story in my hometown and in Los Angeles is the greatest homecoming I can think of, and I am looking forward to sharing this journey with my friends, family and Hedheads."

(Fun fact: The Breakfast Club star Ally Sheedy was the first woman to play the role of Hedwig in 1998, during Hedwig's off-Broadway run at the Jane Street Theatre. But Hall's dual performance will mark the first time in Hedwig's history the same person will play both Hedwig and Yitzhak.)

Hall just completed touring the U.S. and Canada with the Broadway-bound Josh Groban. Prior to Hedwig, she starred as Nicola in Kinky Boots. Hall's other stage credits include The Toxic Avenger, Tarzan, Dracula, 42nd Street, Cats, Beg Bugs and Green Eyes. She's appeared on TV and film in HBO’s Girls, Good Girls Revolt and My Little Pony: Friendship Is Magic.

Directed by Michael Mayer, Hedwig and the Angry Inch tells the story of a fictional rock ‘n’ roll band, fronted by Hedwig, a transgender woman from communist East Berlin. Between rock songs, Hedwig regales the audience with both humorous and painful stories about her life, including her botched sex change operation. Trask’s score features “Tear Me Down,” “Wig in a Box,” “Wicked Little Town,” "The Origin of Love," “Angry Inch” and more.

The 2014 Broadway revival of Hedwig ran for over 500 performances and won four Tony Awards, including Best Musical Revival.