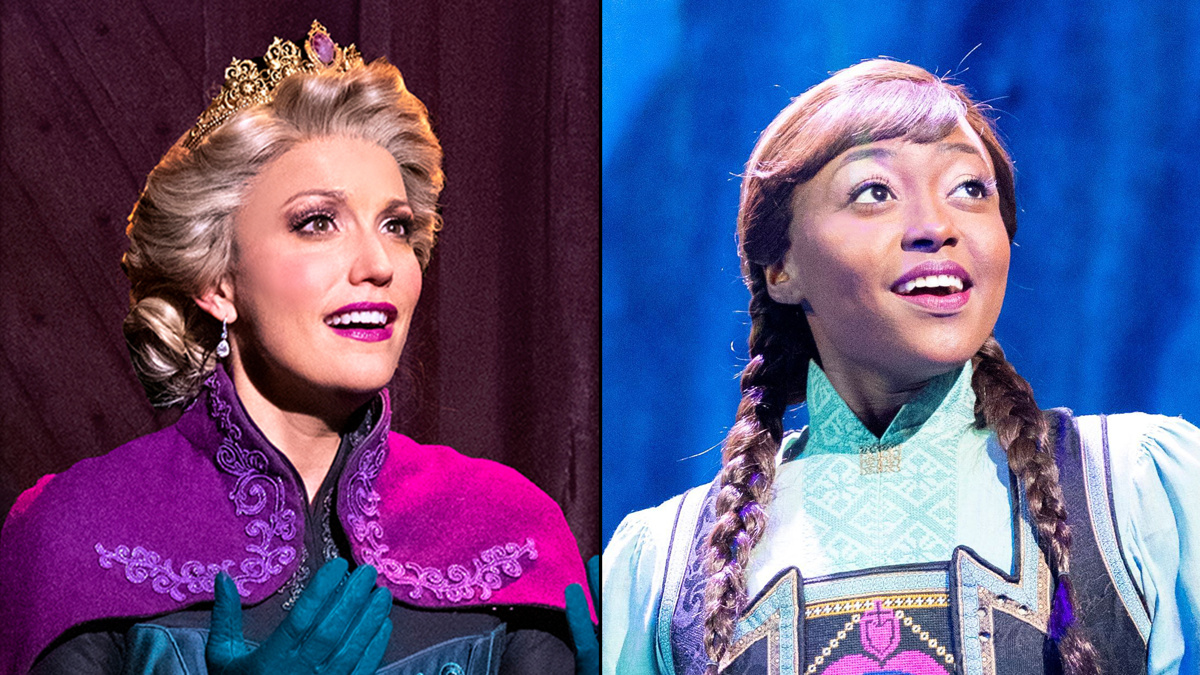 The Disney Holiday Singalong, a festive addition to the company’s popular star-studded singalong specials, will air on November 30 on ABC. Hosted by Ryan Seacrest, the impressive talent roster includes Leslie Odom Jr. and Kerry Washington. Perhaps the most exciting moment for theater lovers will be Disney on Broadway’s heartwarming return to the New Amsterdam Theatre for the first time since the Broadway shutdown began in March. Members from the Broadway casts of The Lion King and Aladdin as well as from the North American touring companies of Frozen participated. Caroline Bowman, who plays Elsa on tour, and Aisha Jackson, the spectacular standby who wowed Broadway audiences when she stepped into the spotlight as Anna, discussed the experience of taking the stage once more.

Just a year ago, Bowman was days away from officially launching the Frozen tour as Elsa at Los Angeles’ Hollywood Pantages Theatre. “Every part of the experience is and was a dream. I just love playing Elsa, and I never thought I’d get an opportunity to play Disney royalty. I was having a blast,” she said about her experience on tour, which stopped performances as coronavirus cases rose in the spring. Jackson also had exciting plans unfolding pre-pandemic. After stepping out of Frozen on Broadway in February, she was gearing up up to play Snow White in the Chicago premiere of the Britney Spears musical Once Upon a One More Time.

Needless to say, the opportunity to perform on a Broadway stage was a welcome one for both Bowman and Jackson. “We as artists had been craving something like this for so long,” Bowman said. “I felt so honored that they asked me.” Revisiting the music of Frozen for the special brought back a lot of memories for Jackson. “It was glorious,” she said. “I had a little tear come into my eye.”

The performers were also thrilled to be representing Frozen together. “For me specifically, it’s awesome to represent Anna, to portray the role on Broadway and now to bring it to people’s screens. Caroline and I have actually never played Elsa and Anna together, so it was cool to be able to connect in that way,” Jackson said. “It was awesome to be able to pair up with her.” The feeling is mutual. “I think so highly of Aisha. She is so incredibly talented. To be her sister for the day was so special for me,” Bowman said.

The process for capturing the performance included a Zoom call ahead of the filming day at the New Amsterdam Theatre. “We talked about what the vision for the song was going to be and were given choreography to learn ahead of time,” Bowman said. “We were tested before the taping, and they took our temperatures on the day. When we walked in, they handed us fresh masks and hand sanitizer. They had us spaced out in the theater so we weren’t seated together. They had COVID compliance officers on site. I felt very safe. It was such a joy-filled day, a day without worry. Those feel few and far between this year.”

Monday night’s Broadway highlight is sure to be a welcome sight for viewers eager to get back to the theater. “This gave us a little bit of the medicine we needed as performers. We’ve been missing being onstage and missing being with one another and uplifting each other through song and dance. It was beautiful to be back on stage—that’s our home, that’s our community,” Jackson said. “I know that the holiday season can be rough for some people, especially with COVID-19. I hope this brings joy and hope to others as it did for us. This is temporary. We will be back together and on the Broadway stage again.”

Watch The Disney Holiday Singalong on November 30 at 8PM ET on ABC, and get a sneak peek at the making of the special below!