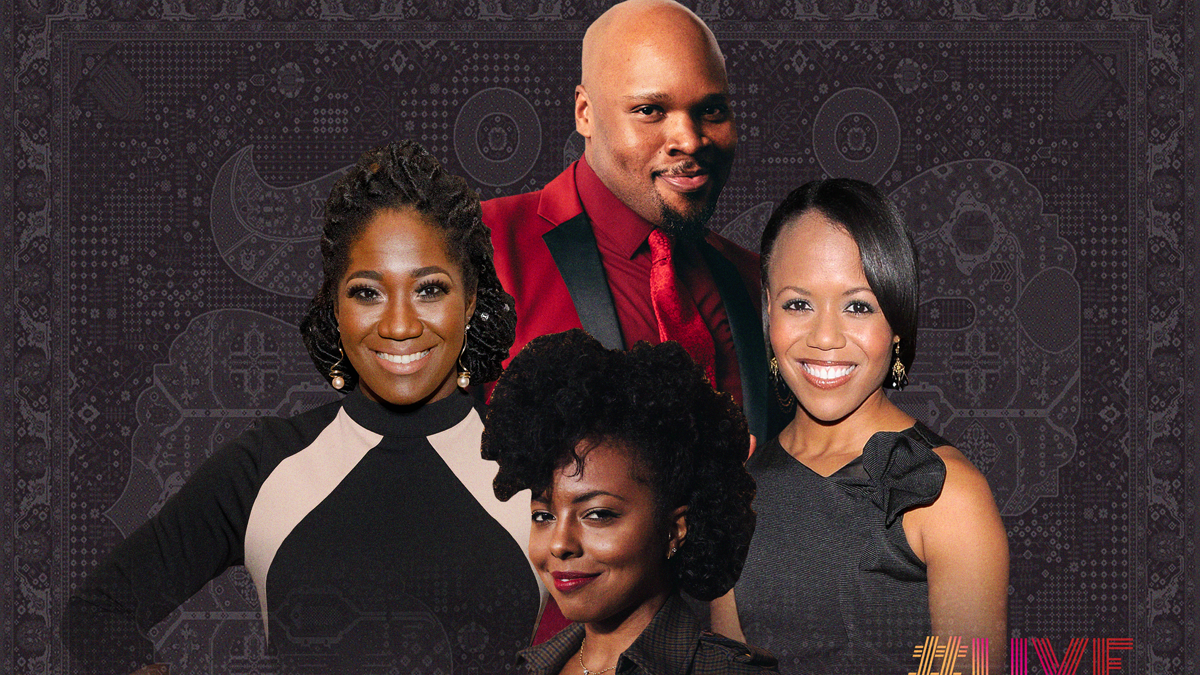 With global protests calling for justice and racial equality, Black Broadway artists are using their voices to promote change. In an effort to keep the conversation growing, Broadway.com invited Aladdin star Michael James Scott to moderate a weekly roundtable discussion on Broadway.com’s #LiveatFive. This week Scott was joined by Adrienne Warren, Nikki Renée Daniels and Amber Iman to talk about their experiences as leading ladies, the importance of “getting uncomfortable” and learning to speak up.

Warren, who reprised her Olivier-nominated performance on Broadway in Tina: The Tina Turner Musical, says it wasn’t until she earned her first Tony nomination for Shuffle Along that she saw the disparity between performers on Broadway.  “I’ve been in Black shows for most of my career,” she said to Scott. “I didn’t really understand fully what it meant to move in this industry as a Black woman because I was soaking up the energy of the Black theater community. It wasn’t until my Tony nomination that I was able to actually see that you walk into these rooms and you’re the only [Black person] there. How do you move in that space without feeling like the entire culture is on your back? The truth is, it does feels like it is. In those moments I remember that I am not alone in this battle. There have been so many people who’ve come before me. Now that I have the opportunities to make decisions about what I work on, I choose things that push the needle forward. I want to work on things that are going to create a foundation that will be stronger and more equitable for a generation after me.”

After moving to New York City in the early 2000s, Daniels quickly became a staple on the Broadway stage, appearing in Aida, Nine and Les Misérables. Now with 10 Broadway credits to her name, Daniels reflects on her beginnings. “When I first moved to the city, the only actress you saw being ‘colorblind cast’ was Audra [McDonald],” she said. “There weren’t a lot of people of color in leading roles, especially as the ingenue, which is what I felt like was more my niche. From the beginning, I always pushed to get seen for things like Christine in The Phantom of the Opera. Even though I knew there had never been a Black person in the role before me, I really tried. We have to work twice as hard to get half as far and sometimes it feels like someone is just waiting for you to act like a fool.”

When Iman made her Broadway debut as Nina Simone in 2013’s Soul Doctor, she was convinced her casting was a mistake. “A lot of people don’t know this, but Nina was to played by India.Arie. She had signed on and the role was hers,” Iman said. “I was supposed to be her standby, but then I got a call that India had dropped out, and I would be playing Nina. I didn’t speak to anyone for the first week because I was petrified.” She also recalls a time when she had to make a difficult decision. “I remember the producers telling me they wanted to send me to Harlem to sing at different churches as Nina Simone. Nina didn’t really have any gospel hits, and when I asked them why they wanted me to do it, they said, ‘We sent out flyers, but Black people don’t read. If we send you to Harlem to sing, they’ll listen and come see the show.’ I can’t describe to you what that made my soul feel like. I had called on every Black women I know to empower me, to educate me, to lift me, and here I am alone in a room of white men who are in control. I ended up writing them a letter saying I would not do it because I didn’t have the power to say that in front of him in that moment. I go into rooms naturally guarded and amored up now. I would love to be able to just go to work and tell the story, but we haven’t gotten there yet. I wish I wasn’t so jaded just waiting for the doom.”

“I want to work on things that are going to create a foundation that will be stronger and more equitable for a generation after me.”

Prior to the COVID-19 pandemic shuttering Broadway for the remainder of the year, Daniels was seen as Jenny in the Marianne Elliott-helmed Company revival, which has been unlike anything she’s done before. “This is my first role on Broadway that was originated by a white actor and has mostly been played by white actors, other than when I was an understudy,” Daniels said. “This production is completely different. I think that diversity in Sondheim shows should be happening more. This show is set in New York City in 2020, so, of course, people have friends of all races, and that should be shown on the stage. I also love that Rashidra [Scott], who plays Susan, her character and my character are very different. It’s not like we’re these Black chicks. We’ve made completely different character choices and have been supported in that. I also understudy Bobbie, which is really exciting. My motto in this business is ‘always run your own race.’ You’re not really in competition with anyone because everyone is bringing something different to the table. I just try to help everyone succeed because we’re all in this together, right?”

Listen to the full conversation by watching the episode below!